After two weeks of pre-semester brainstorming and four weeks on discussion into the semester, we're having a bit of a problem: We have no idea what the game should look like.

At the moment, our project team is having trouble with artistic vision. It's one of those things that we didn't think would be a problem. Here is the basic premise: The art needs to be inspired by the narrative. The narrative needs to fit around the entire game. And we can't make the game without art. And this, ladies and gentlemen, is what we call a creativity deadlock.

The opposite of this


How do we break out of a creativity deadlock? The easiest way...is to just come up with everything at once! Just have everyone sit down and nail down the art, narrative, and entire game at the same time. But if you've done any team game development at all, you know that it usually doesn't work that way. Nothing comes together all at once. Even if you suddenly have a cohesive vision (which we struggled with from the beginning), that vision will indubitably change throughout the building process.

Another way to approach a creativity deadlock is to work from different angles. Experiment with art and narrative on their own and let them cross-pollinate each other. We also tried this approach for a few weeks, but it seemed that the pieces we came up with did not quite come as coherently together as we hoped. For example, our concept artist (who bases all his art  To be honest, I think this process could work if we had a lot of time to iterate, but we're feeling pressure to create things for GDC. 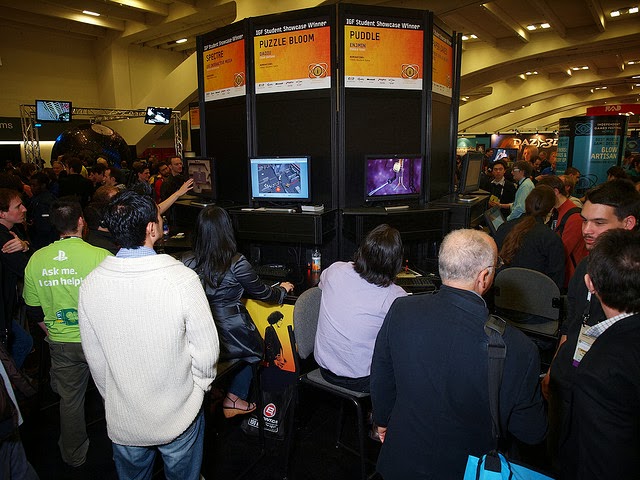 
Then are there any solid decisions for the game that won't change? Yes. One is the puzzles we have, and the other is having a jazzy soundtrack. But herein lies the problem.

Also, "jazzy" turns out to be a very confusing term. Some team members immediately understand my interpretation of the word down to a T. Other members have different ideas about jazz or . However, this isn't really surprising - there's a huge variety of jazz.

Other things that we tried:

Making a ranked word association list. The idea is, as a group, create a list of words related to your game and rank them based on how important they are. This helped us inform each other what we were all thinking of and discuss which direction our game should head in. However, it still wasn't concrete enough to build things from.

Some other things I could have tried:

Instead of having one song or one picture to act as inspiration for the game vision, create a gigantic folder of stuff that give the atmosphere or feel of the game. Therefore, you only need a glance to get a comprehensive feel of the game. Include things like pictures, colors, and music. Of course, a danger with this approach at this point is that it might be too "blue-sky" and pull progress back again.

So what do we do?

Another possibility is that getting stuck all the time is part of the process. After all, we ARE asking a lot from our art: it has to be recognizable and stylish and unique that can be easily produced. Also, it can't be too similar to Portal, Scale, Antichamber, and Unfinished Swan. (In my opinion, Portal really nailed it in terms of design, theme, and narrative. Unfinished Swan was smart in picking a )

Maybe the key is to just try something - and not be afraid to fail and redo it until it feels right. Narbacular Drop took 1 year to produce and Portal required an additional 2 years and 8 months.The Unfinished Swan took about 4 years to make from prototype to full game...and let's not even talk about Fez.